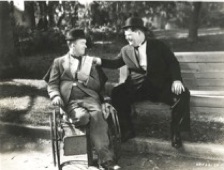 On a beautiful Fall evening, 41 lucky Laurel and Hardy fans attended our “Modern Life!” film evening, which began with our usual rousing chorus of “The Sons of the Desert” song. We went straight into the Warner Brothers animated cartoon “Porky’s Road Race”, released February 6, 1937, which featured Porky Pig, Boris Karloff, W.C. Fields, Charlie Chaplin, and our course (in a small role) Laurel and Hardy! It wasn’t mentioned but this indeed was Mel Blanc’s very first WB cartoon appearance – he supplied (naturally) the voice of Porky Pig.

Following the cartoon was a short newsreel about the opening of the Fremont Theatre in San Luis Obispo, CA on May 29, 1942. Laurel and Hardy were among the stars attending the opening and, along with other stars from Hollywood, encouraged attendees to buy War Bonds.

Next on the program was Laurel and Hardy’s silent film, “Double Whoopee”. It was filmed in February and released on May 18, 1929. Featured performers with The Boys here were Charlie Hall, Tiny Sandford, William Gillespie, Sam Lufkin, and of course the 17-year old Jean Harlow. We watched as Stanley and Oliver, in their new jobs as footman and doorman at a ritzy hotel, wreak their usual havoc on the guests, including partially undressing a swanky blonde guest (Harlow) and repeatedly escorting a haughty Prussian nobleman into an empty elevator shaft.

Of note was the fact that this is the same hotel set that was used for the Our Gang short Barnum & Ringling, Inc. (shown at our all-silent meeting last July). In fact, William Gillespie played the hotel manager in both films! We viewed the silent film version rather than the post-synchronized dialogue track version produced in 1969 with Chuck McCann voicing both Stan and Ollie.

An odd early sound commercial featuring Laurel and Hardy was shown next, an ad for Fyffes Bananas. Animated in the early 1930s, it showed Adolphe Menjou, Maurice Chevalier, and Laurel and Hardy singing about bananas. It was ordered by the Swedish Banankompaniet behind the witty animation was most probably Arvid Olsson (the “father” of animated Swedish cartoons).

Our Gang’s “Hearts Are Thumps” was shown next, which was filmed February 2-10 and released April 3, 1937. It Featured Spanky, Alfalfa, Buckwheat, Darla, Porky, Rosina Lawrence as their teacher, and the rest of the Gang, and involved Alfalfa’s girl trouble with Darla. Spanky and Buckwheat ‘doctor’ Darla’s lunch so that when she shares it with Alfalfa, he gets a mouthful of soap. Add some water, and there are bubbles galore when Alfalfa sings. This short of course was the first to feature the “He-Man Woman-Haters Club”, which was formed because, after all, girls are the bunk!

We followed the Our Gang short with a 1966 cartoon from the Hanna-Barbera Studios co-production with Wolper Productions, and released by Larry Harmon Pictures, “How Green Was My Lawnmower”. These Harmon cartoons were made for several seasons, and along with the Abbott and Costello cartoons by Harmon, sought to capitalize on the names of the these stars. There were 156 episodes of these cartoons, so I don’t think we’ll get through them all!

Larry Harmon had acquired the rights to the likenesses of Laurel and Hardy. Harmon’s company had previously produced the Bozo animated cartoons and many of the made-for-TV Popeye cartoons. Harmon himself supplied the voice of Stan Laurel, with Jim MacGeorge voicing Oliver Hardy.

As an extra surprise bonus film addition to the already gala-evening, we next screened the Laurel and Hardy cameo appearance scenes from the June 1, 1934 release “Hollywood Party”. This film starred Jimmy Durante, Jack Pearl, Polly Moran, and Mickey Mouse (among others), and featured all of the big stars signed to MGM at the time. We saw Laurel and Hardy ring the doorbell to try to get into the party, and having accomplished this (after the usual mayhem) they unfortunately run into Lupe Velez at the bar, where an act of “reciprocal destruction” ensued with eggs as the weapons of choice!

After a most enjoyable intermission we resumed the show with a photo montage of our July 4th Northside parade participants. The Chimps looked awfully good in the get-up garb, didn’t they. A plea was made for continued participation at the 2011 parade.

The final film selection for the evening was the streamliner “Block-Heads”, released August 19, 1938 and starring The Boys along with Patricia Ellis, Minna Gombell, Billy Gilbert, Tommy Bond, and Jimmy Finlayson.

We saw how that in 1938, Stan didn’t know the Great War was over; he’s still patrolling the trenches in France, and shoots down a French aviator. Oliver sees his old chum’s picture in the paper and goes to visit Stan at the Soldier’s Home. Thinking Stan is disabled (it’s just that he’s sitting on his leg), Oliver takes pity on him and takes him home for a nice home-cooked meal. But Oliver’s wife has other ideas and leaves him to fend for himself. After blowing up the kitchen, Oliver is helped by his next-door neighbor, Mrs. Gilbert… until the big-game hunting Mr. Gilbert comes home unexpectedly, carrying a shotgun. The film, a reworking of elements from the Laurel and Hardy shorts We Faw Down (1928) and Unaccustomed As We Are (1929), was Roach’s final film for MGM, and is remembered as one of Laurel and Hardy’s most successful films.

We noted that the role of Mrs. Hardy was originally intended for actress Mae Busch, since an early draft of the script referred to Mrs. Hardy as “Mae”. We also mentioned that when this film was released it was announced as being the last Laurel & Hardy movie. Well, it was the last Hal Roach production for MGM, as he subsequently switched to United Artists due to Roach’s perception of less than adequate MGM promotion of his film “Topper”. We also recognized that former 1920s silent star Harry Langdon had been hired by Roach as a gagman at the studio, and Block-Heads reprised Langdon’s 1926 Soldier Man in that Laurel was left in the trenches of WWI, unaware of the war’s end.

T. Marvin Hartley’s musical score for the movie was nominated for Best Original Score of 1938 by the Academy of Motion Picture Arts and Sciences, but did not win, and we mentioned that the alternate ending suggested by Stan whereby he and Ollie are mounted like animal trophies on Billy Gilbert’s apartment walls, was vetoed by Hal Roach.

After this film was completed, Stan Laurel and Hal Roach had a contract dispute, and Ollie was signed on to play the part of a country doctor in the 1939 film Zenobia, which also featured Harry Langdon and fueled rumors that Laurel and Hardy were no more. It was Ollie’s first film without Stan since 1928. The new Hardy/Langdon partnership lasted for just one film, as Stan settled his differences with Roach and the Boys signed new short-term contracts.

And then, much too soon, the evening was at an end. Not to worry however, our heroes will return on December 11 in Clifton for some “Wacky Winter Holiday Hijinks!”. We hope that you will join us then for a special evening of festive film frolics. 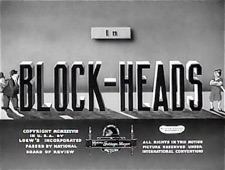 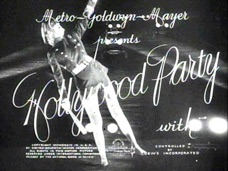 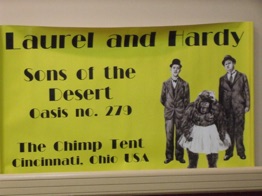 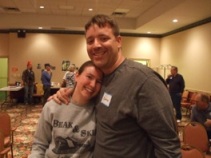 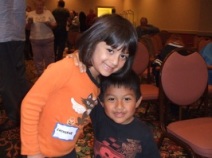 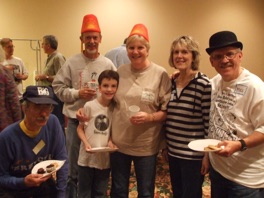 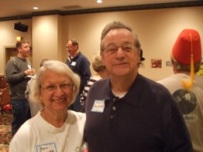 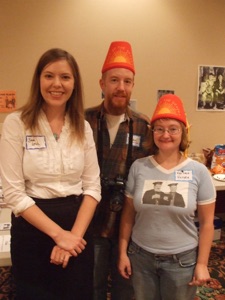 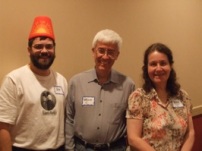 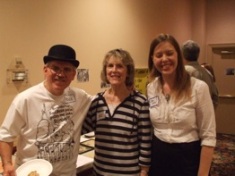 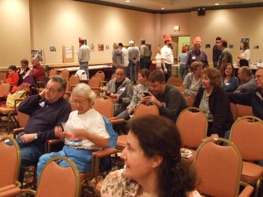