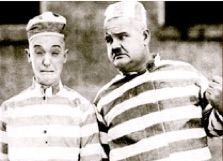 On a blustery and rainy evening 44 fine film fans joined together to enjoy the first screening of the new year. These lucky 44 sang a hearty version of “The Sons of the Desert” song together, which was accompanied by live keyboard courtesy of Joan Chrislip. Next to be screened was “Big House Bunny” (running time ~7:00), released April 23, 1950, directed by Friz Freleng, and voiced of course by Mel Blanc. We watched Bugs Bunny trying to escape hunters by tunneling in to Sing-Song prison. Sam Schultz, the prison guard (played naturally by Yosemite Sam) mistakes Bugs for a real inmate, and you can guess who gets the raw end of THAT deal! We watched the uncut version, the one that Nickelodeon, ABC, and Cartoon Network wouldn’t show for years due to what they thought might be objectionable material (which was no different than seen regularly in Tom and Jerry or Itchy and Scratchy cartoons by the way!).

Our first Laurel and Hardy short film for the evening was “The Second Hundred Years” (19:56), released October 8, 1927, directed by Fred Guiol, produced by Hal Roach, written by Leo McCarey and H.M. Walker, and was their first film distributed by MGM. We kept a watch out for supporting actors Charlie Hall, Jimmy Finlayson, Dorothy Coburn, and Tiny Sandford.

Basically, The Boys played cons who attempt to escape via tunneling, and then by disguising themselves as painters. Proving that crime doesn’t pay, their efforts are wasted as their plans to steal suits from visiting dignitaries lands them back at the prison because the dignitaries were scheduled to visit the prison!
We noted that Laurel and Hardy’s heads were shaved for their appearance in this film, and their hair had not yet grown back in their cameo roles in Max Davidson’s “Call of the Cuckoos” (1927), released a week after this film. In addition to this, this film is of particular interest to Laurel and Hardy fans because it is the film that led Stan Laurel to acquire his famous spiky hair that became a part of his screen image. As his hair was growing back, Stan noticed that his constant attempts to keep his hair under control were causing the crew and other people on the Hal Roach lot to laugh. So Stan decided to keep his hair spiked in his films, due to its usefulness as a laugh-getter.

We followed “The Second Hundred Years” with a special surprise: an unaired Anco Wiper Blade Commercial featuring Laurel and Hardy look-a-likes. Made for the 1979 Super Bowl, this particular commercial was not aired; two other Anco commercials featuring these same Laurel and Hardy impersonators were aired during the game (and shown at our meeting last May). Chuck McCann played Hardy to Jim MacGeorge’s Laurel in this commercial.

Next we showed the June 12, 1937 Our Gang short release “Roamin’ Holiday” (10:32), which was directed by Gordon Douglas, produced by Hal Roach, with music by Marvin Hatley. Here the Gang doesn’t like having to do household chores, especially baby-sitting, so they run away from home. When a nice storekeeper at the next town takes them in and finds out they’ve run away, she tells her husband (the sheriff!) who decides to ‘teach the boys a lesson’ and pretends to arrest them, outfitting them in convict stripes and making them work a rock pile. Not to worry, bee swarms notwithstanding, the Gang return home safely and conclude that it’s not such a bad place to be! Buckwheat and Porky shine in this film.

Our final entry prior to intermission was a short clip from the April 4, 1931 entry entitled, “The Stolen Jools” (titled as “The Slippery Pearls” in the UK). While the entire short film runs for 20 minutes, we only showed only the brief clip which featured Laurel and Hardy (1:29). This film, released April 4, 1931, was directed by William C.McGann, produced by Pat Casey, and starred (among others) Wallace Beery, Buster Keaton, Edward G. Robinson, Norma Shearer, Fay Wray, and of course Laurel and Hardy. The plot was simple: at the “Screen Stars Annual Ball” Norma Shearer has her jewels stolen. The police must find them and return them to her. Actors in the film appeared in cameo roles and were from different studios such as Warner Bros., RKO, MGM, and Paramount Pictures because the film was made to help raise funds for the National Variety Artists Tuberculosis Sanitarium. Technical costs for this charity film were paid for by Chesterfield cigarettes – imagine a cigarette company funding a charity movie for respiratory diseases. We also mentioned that this film was thought to be a lost until prints were found in the UK and USA in the 1990s.

After the intermission and fabulous raffle we returned with “The Hoose-Gow” (19:05), a Laurel and Hardy very early talking film, released November 16, 1929. The film, directed by James Parrott and produced by Hal Roach, featured support from actors Jimmy Finlayson, Charlie Hall, and Tiny Sandford.

The tagline for this film summed it up nicely: “Neither Mr. Laurel nor Mr. Hardy had any thoughts of doing wrong. As a matter of fact, they had no thoughts of any kind.” Anyway, our heroes are new inmates at a prison after apparently taking part in a hold-up raid, a raid they tell a prison officer they were only watching. A botched escape attempt lands them on a work detail where more mishaps occur, ending with a rice-throwing melee with the visiting governor. It figures!

We mentioned that Oliver Hardy was injured during the filming of the scene in which Stan kept nicking him with the pickaxe. A rubber pickaxe was originally to have been used for the scene, but it was decided that it looked too fake in action, so a real one was substituted. Babe moved a little too close to Stan during Stan’s back swing, and received a very real scar from the pickaxe on his rear!

It is believed that this film contains the earliest appearances of two of Ollie’s pet phrases: “Why don’t you do something to help me?” and “No, no, no, no, NO!”. Thus, in a sense this is a very important sound film of the Laurel and Hardy archives.

We then turned our attention to two other important actors on the Hal Roach Studios payroll: Charley Chase and Thelma Todd, who appeared in “The Pip From Pittsburgh”, a March 21, 1931 release (20:51). Dorothy Granger, Kay Deslys, and Charlie Hall also appeared in supporting roles in this James Parrott-directed film. Here, Charley Chase is non-too pleased to be set up with another blind date after a previous bad experience. Fearing the worst, Charley does his best to become an unattractive slob so his date won’t like him – and then he finds out that the beautiful Thelma Todd is his date, And now Charley has to make himself attractive once again while actually ON the date! We watched to see if Charley could do it…

Our final film for the evening was the Laurel and Hardy June 23, 1934 release entitled “Going Bye-Bye” (19:49). Charley Rogers directed, Hal Roach produced, and Mae Busch and Walter Long (my favorite Laurel and Hardy bad guy) co-starred in this film of revenge taken too far…

After providing evidence to convict the notorious gangster Butch (played with relish by Walter Long), The Boys plan to leave town after agreeing to take a traveling companion (played by Mae Busch) along to share expenses. But guess who the traveling companion’s boyfriend is? That’s right – it’s Butch, who has escaped from custody, comes to Mae Busch’s apartment, gets locked in a trunk, gets out of the trunk, and then seeks retribution on Laurel and Hardy. Does Butch succeed? We waited until the ending to find out!

We mentioned that this movie was written, filmed, and released in a matter of weeks! In mid-May, 1934, Charley Rogers and Frank Terry met with Stan Laurel and came up with a story based on the then-current John Dillinger manhunt. They called it Public Enemies; the script was reportedly retitled On Their Way Out before it was finally christened Going Bye-Bye!

We also watched for the “Excuse me please, my ear is full of milk” scene, which was just wonderful, and kept our eyes on the bunch of flowers brought by The Boys to Mae Busch – they were never put down, even in the final scene of the film.

Another fun evening filled with laughs was completed; our next Tent film evening will be Saturday evening June 26, 2010 in Clifton as we enjoy some “Slaphappy Sea Salts”. We hope you will share the evening (and lots of laughs) with us then! AND DON’T FORGET TO LET THE GRAND SHIEK KNOW IF YOU WANT TO PARTICIPATE IN THE JULY 4 PARADE IN NORTHSIDE! 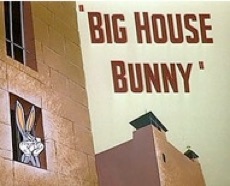 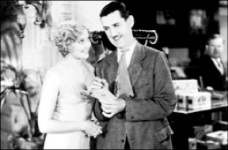 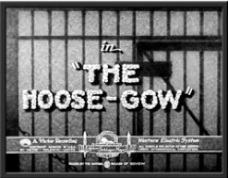 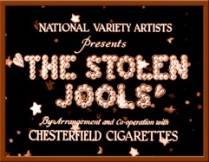 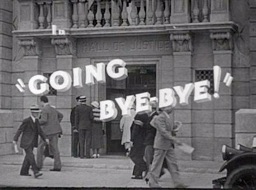 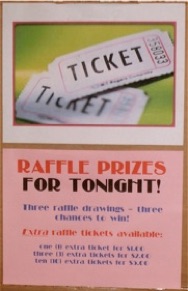 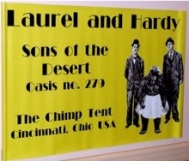 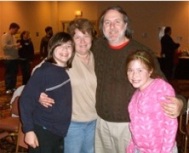 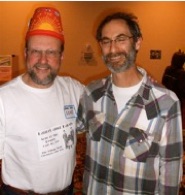 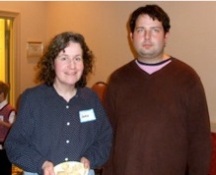 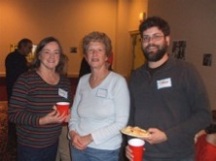 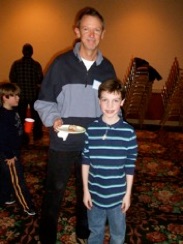 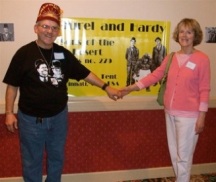 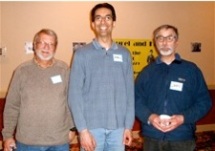 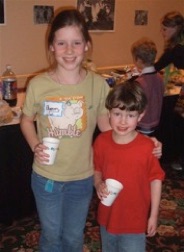 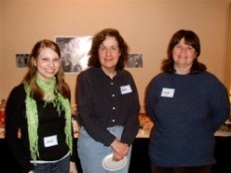 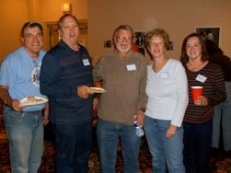 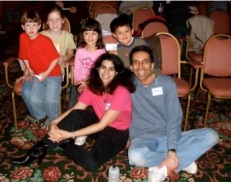 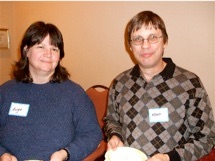 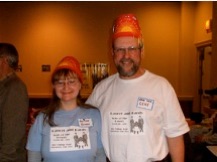