The festive Holiday season was celebrated by thirty-seven (37) oh-so lucky attendees to The Chimp Tent’s “It’s The Holidays!” film frolics. This was the 1-year anniversary of The Chimp Tent, and special thanks were doled out to those who contributions to our Tent over this first year enabled us to succeed as we did. Included in the kudos were all 3 Ohio Grand Sheiks (Rick Lindner of the Perfect Day Tent of Columbus, Brad Farrell of the A-Haunting We Will Go Tent of Dayton, and Flip Lauer of the Big Business Tent of Cleveland. Bob Stowell and Ken Runyan in California were thanked for supplying so many wonderful DVDs and information about The Boys, and in our own Tent, Joan Chrislip was thanked for the wonderful keyboard accompaniment she provided for all the silent films screened during the year, Bruce McCollum was mentioned as the biggest Laurel and Hardy fanatic in the Tri-State, and Vice-Sheik Victoria Baumgardner was recognized for her tremendous assistance in ensuring the smooth runnings of the evenings. The event was held in the beautiful and historic (1925) E.T. Carson Masonic Lodge in Clifton, Cincinnati on a cold, but dry and clear, night.

We soon got warmed up by all singing the “Sons of the Desert” theme song together, and although it wasn’t the Vienna Boys Choir it was a most respectable rendition nonetheless! We then went straight into Toyland Premiere (9:02 running time), a Universal Studios cartoon directed by Walter Lantz (later of Woody Woodpecker fame), which was released December 7, 1934. We enjoyed watching Santa muster his toys to thwart the effort of The Boys to get that chocolate cake!

Next we viewed a clip from an episode of the Dick Van Dyke Show (8:39) entitled, “The Sam Pomerantz Scandals”, which first aired on March 6, 1963. Dick Van Dyke and Henry Calvin performed a nice impersonation of Laurel and Hardy, and we noted that Henry Calvin played the Oliver Hardy-ish character in the Walt Disney remake of “Babes in Toyland” that was titled “March of the Wooden Soldiers”, released around 1960 or 1961. Dick Van Dyke was a big fan of Stan Laurel’s, and in fact this wasn’t the first episode to mention Laurel and Hardy we discovered – in a September 26, 1962 episode entitled, “Never Name A Duck”, Dick Van Dyke brought home 2 ducklings that were named “Stanley” and “Oliver”!

Our attention was then directed to the screening of Our Gang’s The Our Gang Follies of 1938 (21:33), which was directed by Gordon Douglas and released on December 18, 1937. We noted that this was a return to the 20-minute short format that had been abandoned previously by Hal Roach in favor of the 10-minute shorts, and marveled at the lavish dream sequence, featuring of course Club Spanky.

The short’s cast included over one hundred children, as nearly all of the parts in the film (even the “adults” in Alfalfa’s dream sequence) were played by kids. The lone exceptions were Henry Brandon’s “Barnaby” character (not named onscreen, but named as such in the script), and the other three adults seen at the Cosmopolitan Opera House. Brandon’s villainous Barnaby character was a reprise from 1934’s “Babes in Toyland”, which we mentioned would be the feature film of the evening. Of interest was the fact that we learned that for the long medium close-up where he gets bombarded with tomatoes, hard cabbage, lettuce, etc. while trying to sing “The Barber of Seville,” Carl “Alfalfa” Switzer was told he would only be hit with soft tomatoes. Of course, when filming started, he found out the opposite, and was hit by hard tomatoes. The anger seen on his face on-screen was not acting! It was speculated that the vegetable toss (which was done by the crew members for this shot, not the kid opera attendees seen in the wide shot) was payback by the crew for having had to endure the pranks, tantrums, and other mischief Alfalfa regularly caused on the Our Gang sets.

We next watched Our Gang wish us all a Happy New Year for 1936, and concluded the first half with a rousing sing-a-long (as we followed the bouncing ball!) of “Jingle Bells”. Again, those in the opera had nothing to fear from our vocal efforts.

The evening concluded with the screening of Laurel and Hardy’s holiday classic, Babes in Toyland (77:26).

Directed by Gus Meins and Charley Rogers and produced by Hal Roach, this delightful film was released on December 14, 1934 by MGM.

We made mention of the difficulties between Hal Roach and Stan Laurel over the screenplay of this film, and noted that it caused the first real signs of cracks in the relationship between Stan and Hal Roach. Apparently Hal Roach never recovered from his bitterness over Babes in Toyland and it was a precursor to contract problems between he and The Boys later in the decade.

Interestingly, the film is most often known today as March of the Wooden Soldiers. This is the name given to the re-issue that took place many years later when the film and its rights were transferred to various film, VHS, and DVD formats. These versions are 9 minutes shorter than the original, but the colorized version we screened included most of the missing footage, including the cave song (“Go To Sleep”) and dream sequence with Bo Peep and Tom-Tom in Bogeyland.

We had a lot of fun noting that the “actor” in the Mickey Mouse costume was really a capuchin monkey (!) and were amazed at the litany of injuries suffered by cast and crew during the filming of the movie, e.g. Stan Laurel fell off a platform and tore ligaments in his right leg, Assistant director Gordon Douglas slid 15 feet from the top of the Old Woman’s Shoe and tore ligaments in his left leg, Henry Brandon was injured in a bar fight, Kewpie Morgan’s part as Old King Cole called for him to laugh continuously – after two days, he ruptured muscles in his stomach, Oliver Hardy had to have his tonsils removed the day after filming wrapped, and Hal Roach developed appendicitis! And yet through all of this, they managed to create a perfectly delightful family film perfect for the Holidays.

And that was that. The next film fun from The Chimp Tent will take place on March 13, 2010 in the Kenwood area of Cincinnati, at the Seasons Retirement Community auditorium; it’s theme will be “The Con Game”, and you can be sure Messers Laurel and Hardy will have plenty of excuses as to why and how they find themselves in the predicaments that our films will describe! We hope that you will join us…and in the meantime, Happy Holidays to everyone. 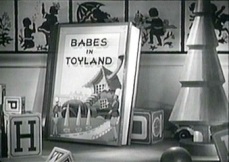 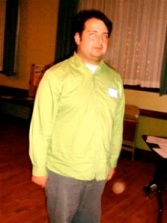 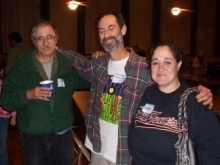 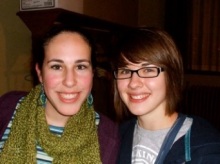