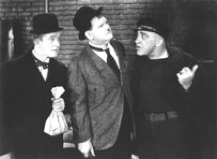 It’s Halloween – time to prepare yourself against all manner of ghastly and ghoulish sights and situations. Never one to miss such an opportunity, your friendly (fiendly?) local Tent was ready to shock your system with some spooky cinema related to Laurel and Hardy, and the Hal Roach Studios. So, we advised everyone (twenty-six brave souls attended!) to take a deep breath, steady themselves and close their eyes (well actually you needed to open them to watch the films!) as we entered the hilariously hideous “Halloween Spooktacular”!

First to darken our doors on this macabre evening was the color cartoon “Balloonland” (running time 6:00). This animated film was released on September 30, 1935, and depicted a charming land where everyone and everything was a balloon. However, everything was threatened by the terrifying Pincushion Man! We challenged people to see if they recognized any of the balloons floating onscreen at the beginning of this strange cartoon.

We continued down the trail of terror with “Habeas Corpus” (19:18), a silent Laurel and Hardy film written and filmed in July, 1928 and released on December 1. Although this film was shot as a silent movie, it was subsequently retrofitted before release with a music track and sound effects. Although we’re not sure if there are any sound disc versions available, technically this was The Boys first ‘sound’ film. The plot of this film was diabolical: Stan and Ollie are hired by a mad scientist to steal a corpse from a local graveyard for the scientist’s experiments. The scientist’s butler, really a detective in disguise, follows the boys and attempts to thwart their efforts. In this regard he is ably assisted by Laurel and Hardy’s own miscues as they themselves flail about in terror amidst tombstones, bats, and ghosts.

The Our Gang kids followed, opening a creaking door that lead us to “Spooky Hooky” (10:32), which was released on December 5, 1936. Rosina Lawrence again played their teacher (as she did in our May meeting’s showing of “Bored Of Education”), but note that she was strangely called ‘Miss Jones’ in this film, while in ‘Bored’ she was known as ‘Miss Lawrence’. Now that IS spooky! At any rate, a circus was coming to town, and the Gang was dejected because they had to be in school. Poorly timed placement of a faked absence note, and announcement that the class would all go to the circus the next day after all, meant that the Gang had to get that note back. So they re-entered the classroom late that night (where are their parents while all this is going on?) to get back that note. But it was a cold, dark, and rainy night, and their eyes played tricks on them, didn’t they? Was…that…skeleton …moving? Did they get that note back and be able to go to the circus the next day? We only found out by containing our ‘terror’ while sitting through to the end of this film…

Laurel and Hardy then returned, still shivering from their graveyard romping above, in “The Live Ghost” (19:40), written and filmed during October-November, and released on December 8, 1934. Arthur Housman, who seemingly always played a drunk, did it again here, and bad-guy Walter Long featured as the captain of a ship that was rumored to be haunted. We kept a look-out for Mae Busch and Charlie Hall in smaller roles here too.

The haunted ship rumors made it hard for the captain to recruit a crew, but with Laurel and Hardy’s ‘help’, a crew was shanghai’d for him. We watched for the scene in the bar with eggs and learned a new meaning to the phrase, “egg on your face” (or in your mouth for that matter!). Captain Long didn’t want to hear about this rumor or ghosts, and threatened a ghoulish fate to any who disobeyed him. Naturally, Arthur Housman, being drunk, falls into whitewash and gets out looking like a ghost – and naturally The Boys panic and blurt out something about ghosts…which induced the Captain to make good on his threat! Oh, the terror!

And now for the first time in our Tent’s short history, we WANTED to feature another of the Roach Studios stars, Charley Chase. Throughout the late-1920s and ‘30s, the Charley Chase shorts stood next to those from Laurel and Hardy and Our Gang as the core output of the Roach studio. Chase’s short film, “Public Ghost No. 1” (20:07) was released December 14, 1935, and the simple plot was that Charley was hired to haunt a house. However, with Charley Chase nothing is ever that simple, as we WOULD HAVE SEEN in this comedy of terrors. Unfortunately, we had a very real Laurel and Hardy moment as this DVD’s sound track did not play – all we got was a nice picture but no sound! Hopefully, we’ll get another copy that works better, and try to show this film next Halloween. In any event, we will feature more from Charley Chase, a talented writer/director/comedian, at future meetings, but for now, we WOULD HAVE BEEN afraid – very afraid – for Charlie as he sought a house-haunting career (which we’ll look into, as I said, “next” year!).

We concluded our creepy collection of silly cinema with the Laurel and Hardy short film, “Scram!” (19:34), released on September 10, 1932. We saw Vivien Oakland (the sheriff’s wife in “Way Out West”) playing Mrs. Beaumont, Arthur Housman (again playing guess what? – a drunk!), and Richard Cramer as Judge Beaumont. But think about this scary fact: the 21st amendment to repeal prohibition was not ratified until December 5, 1933, and yet in this film, released 15 months before then, four of the five main characters were inebriated for a large portion of the proceedings! Anyway, through the various mix-ups and mishaps commonly associated with their characters, Laurel and Hardy were ordered out of town by the meanest and scariest judge (“And never let me set eyes on you again!”) you’ve ever seen, only to meet up with Arthur Housman, who in his drunken stupor led them to his home – only it wasn’t HIS home! The Boys eventually wound up upstairs in a woman’s bedroom, and although we recognized this as “innocent” mayhem on the part of The Boys, events transpire to put them in greater danger than they were ever been in before. You see, this house belonged to Judge Beaumont, who had previously ordered The Boys out of town with that stern warning! Now the Judge came home to find his wife and Mr. Laurel and Mr. Hardy drunk, tipsy, and laughing hysterically together in the bedroom. The Judge was not amused. We watched the Judge’s facial expression as he conveyed to our heroes that they were in store for a very bad time. Scary? You bet! If this film didn’t keep you awake that night (chuckling), we suggested you check your pulse ‘cause you’re not of this earth!

We noted an interesting footnote to “Scram!” that indicated how much times have changed over the past 77 years – according to the Dutch Laurel and Hardy specialist Thomas Leeflang’s book “Laurel & Hardy Compleet”, this film was banned in the Netherlands in 1932 because moral crusaders thought that the final scene where Laurel and Hardy lie on a bed with a woman was indecent! This is Laurel and Hardy we’re talking about, mind you. I guess they just didn’t understand what kind of moral values The Boys possessed!

So, that was the program for this evening’s spookfest. We hope that we didn’t scare you too much, and if so, just keep telling yourself, “They’re only movies!” Thank you to all who attended and for those of you who arrived in costume, please accept an extra special thanks for getting into the spirit of our fun event.

Don’t forget to plan ahead to attend our next screenings in Rabbit Hash, Kentucky (!) on Saturday evening November 7. It will be fun to show the films in a town where the mayor is a dog – a real canine-dog, Lucy Lou! See our upcoming poster advertising this fun event to have a look at Her Honor, the Mayor of Rabbit Hash (on Stan Laurel’s leash!). 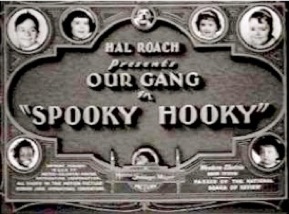 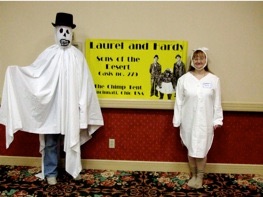 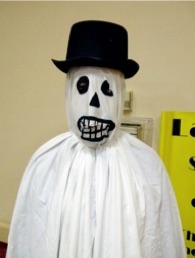 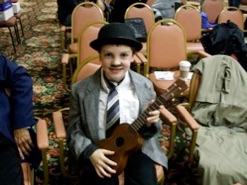 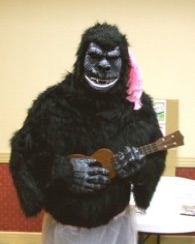 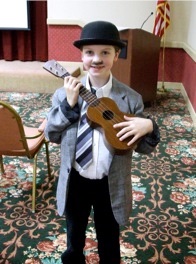 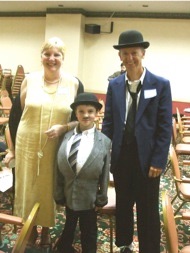 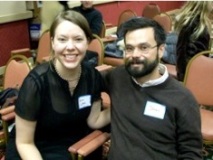 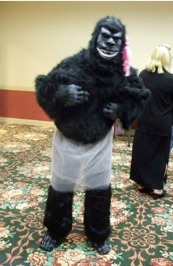 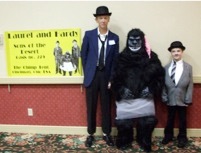 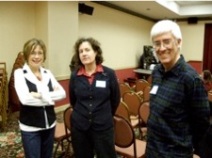 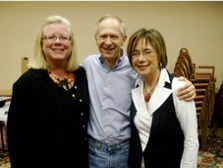 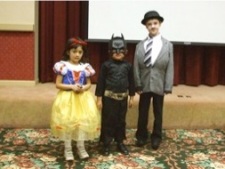 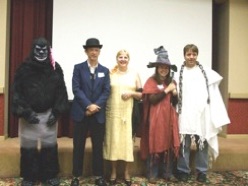 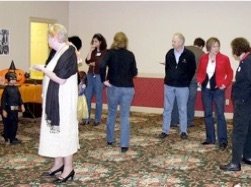 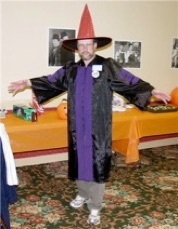 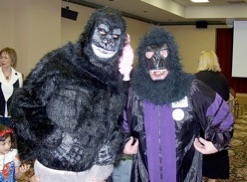 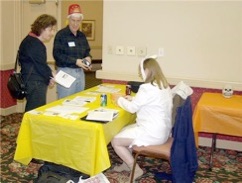 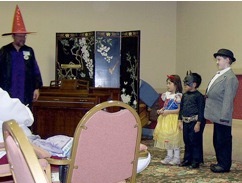 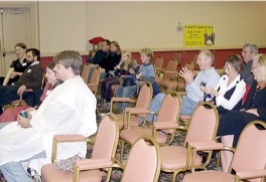 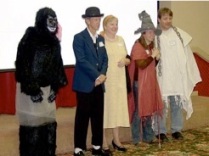 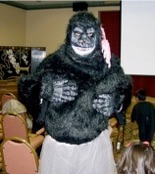 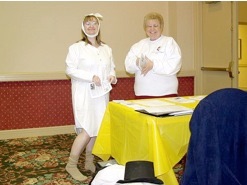